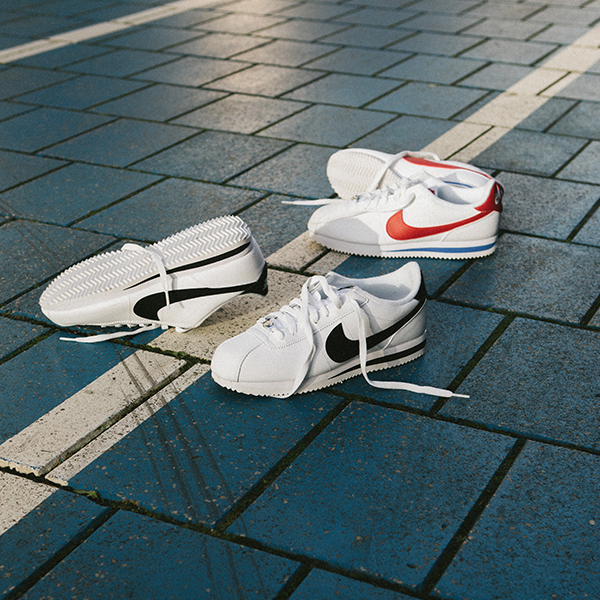 When it comes to footwear and trainers in particular, there are certain silhouettes that come around every so often that become an instant classic and are able to stand the test of time for decades upon decades, transcending trends and new releases with ease. The Nike Cortez is very much of these silhouettes, first originating […]

When it comes to footwear and trainers in particular, there are certain silhouettes that come around every so often that become an instant classic and are able to stand the test of time for decades upon decades, transcending trends and new releases with ease. The Nike Cortez is very much of these silhouettes, first originating in 1972 as the first “modern” running shoe designed by Olympic track coach Bill Bowerman. The Cortez was created to be a ultra comfortable running shoe that helped with long distance objectives alongside rough terrain and was launched during the 1972 Olympics to attract a global audience.

Before coming into existence as the Nike Cortez, there was a interesting previous life to the story of this sneaker that not many know. Bill Bowerman originally worked on a running shoe named TG-24 together with the Japanese footwear company Onitsuka Tiger. In August of 1966, Bowerman ordered a mere 300 pairs of the ‘TG-24 shoe designed by Bill Bowerman w/Mexico Line’ to be distributed and sold in the US under Nikes prior identity ‘Blue Ribbon Sports’. The shoe contained everything that a runner at that time was looking for and went on to become one of the best selling runners of that year for the store. Following this in 1967, Bowerman decided to change this popular styles name to something more easy going – so he decided to go with the name ‘Mexico’. This name was inspired by the upcoming 1968 Summer Olympic Games in Mexico and a direct reference to the sporting nature of the shop. As the year of the Mexico Olympics came around, the team at BRS and Onitsuka Tiger wanted a more marketable name, they ended up titling the shoe ‘Aztec’ – this was based on ancient Mexican history and the Aztec empire. Due to legal issues, it was back to the drawing board for Bowerman once again in search of a new name, BRS finally landed on ‘Cortez’ – which was allegedly inspired by the conquistador Hernán Cortés who defeated the Aztecs and the ‘Cortez’ became an instant bestseller once again.

Soon after on May 30, 1971, Bowerman and Nick Knight changed the name of their young company to Nike Inc. – this time inspired by the Greek goddess of victory. This included their own dedicated line of shoes which included the ‘Nike Cortez’. Showing off their new brand at the annual National Sporting Goods Association trade show in Chicago, Nike introduced three models: The Marathon, Boston and the Cortez. At this time Nike had just secured their first major pro athlete endorsement with Steve Prefontaine and began to incorporate the iconic Swoosh to its footwear offering. Designed by young student Carolyn Davidson, the now Swoosh-bearing leather version of the Cortez retailed for $22.90 at the time and flew off the shelves, the only complaint from customers was it’s weight due to the leather used, this then then led to the introduction of a lighter nylon version.

Beyond the intended market of serious athletes, the Cortez quickly took off in conjunction with the trending casual running movement and also completely out of sport in other cultural street circles. During the early 1980’s, the Cortez became a shoe you could find on people from all walks of life in New York, soon after on the West Coast, an increased popularity of the sneaker came in line with the rise of the LA hip-hop culture, whose community quickly embraced the shoe also. Further cultural moments across the decades have cemented the Cortez its place in history even more, for example being featured in the hit TV show Seinfeld, as they became a key part of the uniform of protagonist George Costanza. Rumours say that when the show had finished recording, actor Jason Alexander asked the team if he could could keep a pair of Cortez as a reminder. Looking back at the history of the Cortez, it is impossible to not mention Forrest Gump. The movie has often been called a “product placement slam dunk” for Nike and the Cortez rocketed to new heights in line with the movies success. Given as a gift by his soul mate Jennie in the film, the Cortez unlocks Forrest’s magic running skills that powers him to run across the entire United States for three years – you can’t get a better showcase than that.

A favourite here at HIP, we enjoy the Cortez for its no frills design, vintage feel and ability to be worn with any outfit with ease. Here’s to the next decade with the Cortez.

The Nike Cortez is available online now at HIP.