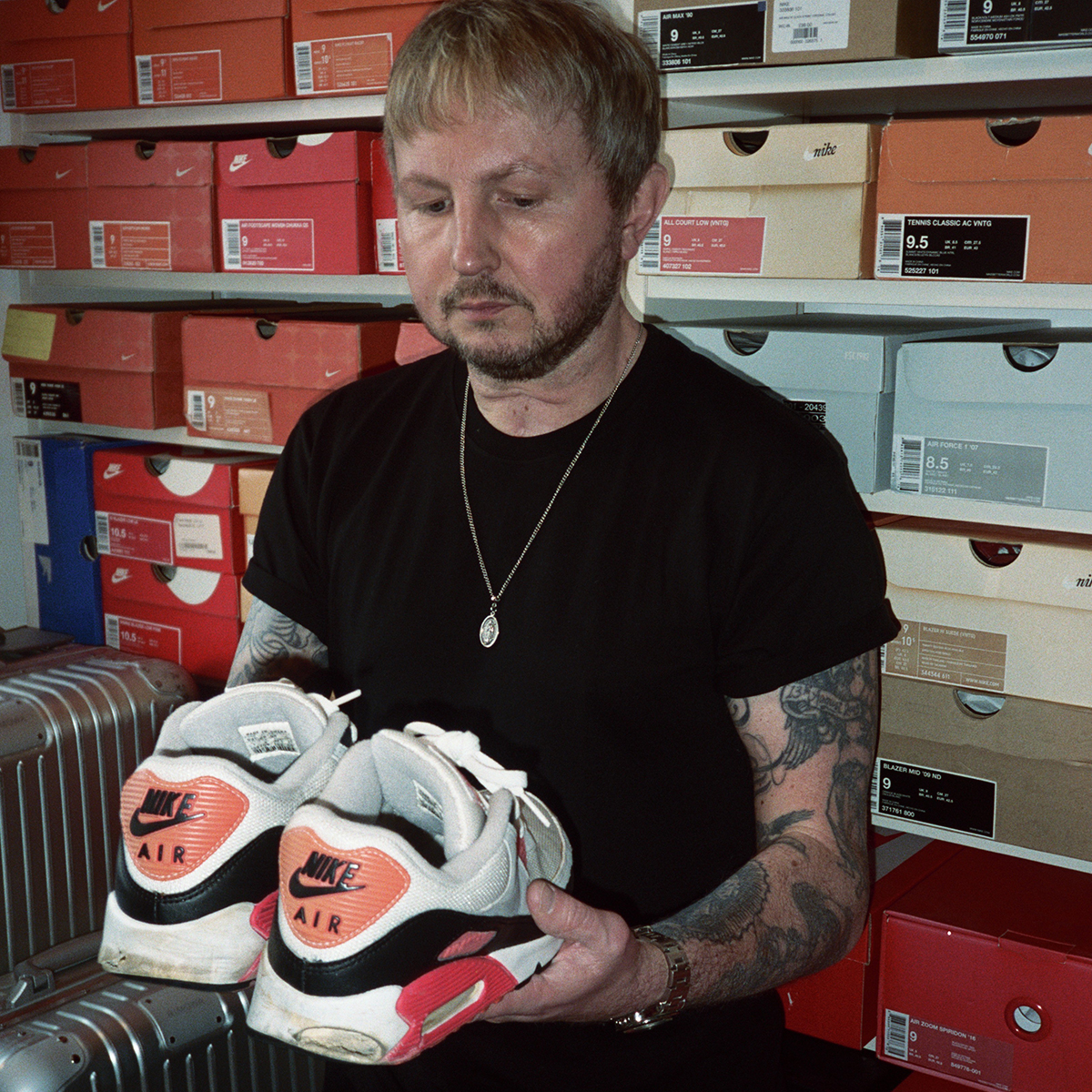 To celebrate Nike Air Max Day this week – we visited DJ, brand consultant, auction house curator and all round streetwear guru Ross Wilson to explore his Air Max archive collection and talk about his top 4 all time silhouettes.  Hi Ross, thanks for taking the time to talk to us, firstly could you explain a […]

To celebrate Nike Air Max Day this week – we visited DJ, brand consultant, auction house curator and all round streetwear guru Ross Wilson to explore his Air Max archive collection and talk about his top 4 all time silhouettes.

Hi Ross, thanks for taking the time to talk to us, firstly could you explain a bit about yourself for those who don’t know – what has your career entailed, what do you do know and where are you based?

I’m a DJ, writer, brand consultant and auction house curator. I work with a variety of interesting clients such as Highsnobiety, Christie’s, Sneaker Freaker, Sotheby’s, Soho House and Dr. Martens. I’m based in Somerset, but the majority of my work is all over the place — anywhere from New York to Melbourne.

What initially got you into sneakers?

My first pair of Nike’s were white/red Bruins when I was 10 years old and I thought they were the greatest thing ever! I wore them for everything – skateboarding, BMXing, having a kick about, etc.

A couple years later I saw Mark Gonzales wearing a pair of red/white/black Air Jordan 1’s in Thrasher magazine and I was fascinated by his hi-top leather Nikes. This was 1985/6 so I had no idea who Michael Jordan was (or what the shoes were called), but Gonz was my hero back then and he just looked so damn cool. A relative of mine visited the States later that year, and brought me back a pair of the same shoes Gonz was wearing in the photo I’d had pinned up on my wall for the past 8 months, I couldn’t believe it! I’ve been fascinated by interesting looking footwear ever since.

What were your first pair of Air Max and when did you get them?

The first Air Max I owned were the original AM 90 ‘Infared’ (called the Air Max III back then) in 1990. They just felt so different from anything else I’d owned before.

The legacy of Nike and Air Max is one of the most impressive and unrivalled when it comes to dedicated collectors, why do you think this is?

That’s a hard one for me to comment on as I’ve never considered myself an Air Max collector, or even a sneaker collector for that matter. I’ve always just bought what I like to wear, rather than to collect. I guess the Air Max line appeals to collectors as there are so many variations, collaborations and colourways of the well designed silhouettes.

You spent a lot of time travelling to New York in the ‘90s, what was this experience like travelling between the US and the UK and seeing the evolution of streetwear, sneakers and Air Max in particular?

It was a very different time back then – New York was the epicentre of sneaker culture at a time when ‘culture’ actually meant something. There was pretty much zero online stuff and the reseller scene hardly existed. You’d connect with people through a passion for sneakers, whether that was via sports, fashion, music or design – it was all about the look of the shoes rather than the status or the potential profit margin.

I’d hit up the bargain bins at Transit on Broadway for $20 Dunks, the Fulton St Mall in Brooklyn for retro Jordans or Footaction in Midtown for Air Maxes and Uptowns. The British Pound was so strong against the US Dollar back then, so sneakers were crazy cheap and the buzz of finding styles like Air Force 1s and Dunks that weren’t even available in the UK was kinda exciting.

I’d hang out at the Supreme store on Lafayette to chat shit and watch skate videos, check out various mom’n’pop sneaker stores across the 5 boroughs, then hit up the parties every night – it was a fun time to be in the city as there was a close-knit community of like-minded people who were all into skating, partying and sneakers and many of them remain some of my closest friends today. It was pretty much the birth of what we now call ‘streetwear’ so we were witnessing these creative people turn their passions and ideas into global brands.

The Air Max 90 ‘Infared’ hadn’t been available in the US since the OG, so when the European retro happened in 2003 it was like crack for people out there! The shoe was readily available in England so I was buying tons of them and hooking up all my mates in NYC – I’d lace up all the Supreme crew, the guys at Nom de Guerre, Stussy, Union and even some Nike employees. That shoe was so in demand, I’ve never seen anything like it since. I became known around NYC as ‘The British Nike Guy’ and even started getting requests from strangers looking for an Infared hook-up. Once JD Sports acquired the licence for Nike’s ‘NYC’ logo and started putting out Euro-exclusive Air Force 1s with this branding, it kicked up to yet another level! There was no StockX, no Flight Club, no Stadium Goods, etc. and stores didn’t really do international shipping, so I was supplying stores, collectors and sneakerheads with EU-exclusive Nikes. It was pretty crazy looking back!

What keeps you into sneakers and what does it take to grab your eye these days?

All that new overhyped stuff gets so rammed down your throat through social media and blogs it just kinda puts me off wearing it. I was invited to an event in London and every single person in there was wearing the same shoes, it was like they were all clones! Sneakers used to be more about individuality, but now it feels a bit like people are more interested in being accepted rather than expressive with their footwear choices.

Please could you give a brief backstory of first purchasing the below sneakers and what drew you to them then and what keeps them fresh now?

I think this may be my all time favourite Air Max sneaker and definitely a colourway that flies under the radar for most people.

When this shoe first came out in 1995 I wanted it so badly but the £110 price tag seemed so crazy back then (when most sneakers cost around £40-£60). When they eventually ended up on sale so I picked up three pairs – the white/red/grey, volt/grey and white/green/black.

Although it’s one of the least popular AM95 versions, there’s something about the red/grey/black colour grading on the white leather/mesh just looks so good to me. The red air bubble and mini Swoosh finish it off perfectly. I’ve had three pairs of these since they first released and I wish Nike would retro them again as I’m down to my final one!

Alongside the Comet Red, this was my other must-have 95 when they first dropped. In 1995 I was running big raves all over the country and the AM95 was the DJs shoe of choice – it was incredibly comfortable and looked so futuristic. Sergio Lozano’s design based on the human anatomy just hit like nothing else before it, especially in the grey/volt colourway. This was a major obsession for some Japanese sneaker collectors and pre-worn pairs would be selling in Camden Market for £500+ which seemed bonkers back then! I’ve owned about seven pairs of these since 1995, with the last reissue in 2015 being the best quality since the OGs.

I feel like the 1990s was the golden era for Nike in terms of design. They were killing it with groundbreaking silhouettes like the Footscape, Air Rift, Air Moc, Terra Humara and stuff from the ACG line. It was an exciting time for me as hi-tech running sneakers were taking over from loafers as the essential footwear for the UK club scene, and nothing resonated with clubbers like the original Air Max 97. The sleek streamlined design and eye-catching metallic silver upper felt like a perfect mix of high fashion and functionality. The other colourways  and remixes of this shoe never really appealed to me, it was all about that Japanese bullet train-inspired silver/red OG that looks as good now as it did 23 years ago.

This shoe is so timeless for me, it looks good with everything – denim, cargos, joggers, shorts, chinos. I’ve had so many versions of this shoe with all the retro’s they’ve put out over the years, and it never fails. I’m really selective when it comes to Air Max sneakers and these four models/colourways are the shoes that have stood the test of time for me personally, and will forever be in my rotation.

Shop Nike Air Max online now and keep up to date with Ross by following him here.