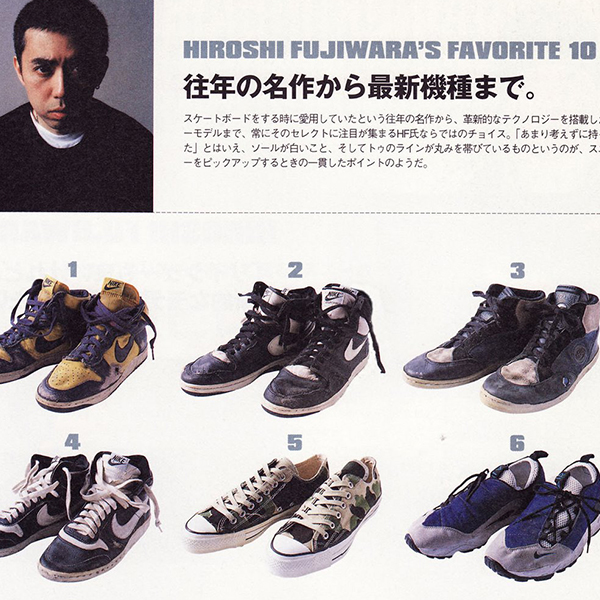 To coincide with the release of the Converse x Moncler GENIUS 7 x fragment design Chuck 70 Ox, we decided to take at the look at the deep history of Hiroshi Fujiwara and how fragment design perfected the art of the collaboration. With a storied presence dating back over 30 years in the industry, Hiroshi […]

To coincide with the release of the Converse x Moncler GENIUS 7 x fragment design Chuck 70 Ox, we decided to take at the look at the deep history of Hiroshi Fujiwara and how fragment design perfected the art of the collaboration. With a storied presence dating back over 30 years in the industry, Hiroshi Fujiwara is commonly titled as the godfather of streetwear and for good reason. From being involved in the early days of Tokyo’s Harajuku scene in the late 80’s to now working on pivotal multi-brand global projects that touch all areas of contemporary style, street fashion and lifestyle goods – he has done it all. Over the years it has became even more difficult to define Hiroshi in a single title or bracket due to the sheer amount of areas he has touched and influenced and should be seen for the worlds he has created rather than products he has created. Fujiwara’s current projects include roles as a musician, designer, curator and consultant — some might say Fujiwara set the pace for the multi-faceted creative space we see today decades ago,

Born and raised in the coastal city of Ise, Mie in 1964, Hiroshi moved to Tokyo at the age of eighteen and quickly immersed himself in the city’s music and fashion scenes. One of his early passions was punk rock which led him to travel to London and open his mind to new cultures first hand. In London Hiroshi was lucky to meet Malcolm McClaren (manager of The Sex Pistols) who told him if he liked London he should visit New York to further broaden his cultural palette. Soon after this, the Japanese youngster found himself in the big apple where he was then introduced to hip-hop in New York during it’s golden years. Fujiwara started shipping American records back to Tokyo and became a pivotal link before the days of the internet between American hip-hop and the bubbling scene following it in Japan. This transition into him playing DJ sets across Tokyo and introducing a whole generation to hip-hop as a genre in real time as it unfolded in the States. In addition to his musical connections growing, Hiroshi’s multiple trips abroad expanded his network of friends within streetwear – notably a man by the name of Shawn Stussy which led to him becoming the international gatekeeper for the Stüssy Tribe in Japan. Following this friendship, the Stüssy founder made sure the tribe was repped by the best in Tokyo and shipped boxes of free Stüssy product to wear and share amongst Hiroshi’s friends in Tokyo.

As the 80’s turned into the 90’s the local streetwear scene Hiroshi was apart of was about to explode, Tokyo’s creative Harajuku district would grow to become the centre of the sub-culture where many respected brands today formed thanks to the melting pot of creatives that supported each other and worked on projects before the word “collaboration” even existed in fashion. In 1990, following in the path of labels such as Hysteric Glamour, Fujiwara launched his own brand GOODENOUGH. Mixing his knowledge gained from the US and the UK with his passion for punk, hip-hop, and style – GOODENOUGH was active in giving the emerging scene some of its most famous names, such as former BAPE affiliate and Cav Empt co-founder Sk8thing and is commonly referenced as the first true streetwear brand from Japan. GOODENOUGH was inspired by Hiroshi’s favourite labels at the time which were Stüssy and an English BMX label called Anarchic Adjustment. Instead of focusing on just one culture, Fujiwara used street fashion as a platform to communicate many sub-cultures through one language, this concept can be seen and used still through many of the biggest labels today. GOODENOUGH used pop-culture inspired graphics to attract a loyal following and elevated the brand by pricing tees at a much higher, more designer goods price rather than the average local brand. GOODENOUGH released items in small quantities that sold out on the day they were released, a typical formula later seen utilized by key players such as WTAPS, Neighborhood, A Bathing Ape and Supreme.

As Tokyo fashion and the world of streetwear evolved with the internet and became a global interest, Fujiwara remained at the forefront consistently -GOODENOUGH eventually gave way to a new project and way of producing goods: fragment design. Hard to pin down but always iconic, fragment is a combination of identities – a brand, design agency, consultancy firm, and marketing spectacle. fragment design became a new space for Fujiwara to collaborate with brands and companies on an intimate basis to create a wide spectrum of products ranging from sneakers and apparel to electronics and coffee cups. Always bringing something fresh to each project, fragment changes depending on the angle from which you approach it. Sometimes a small colour tweak and logo placement may seem basic, but the iconic two lightening bolts is a stamp of approval from someone with over 30 years experience in the game who only settles for the best. With notable collaborations ranging from partnerships with Nike, Converse, Supreme, Beats by Dre, Starbucks and even Pokemon, fragment has been able to define an intersection of culture where lifestyle, product and pop culture meet in new ways that still feel natural with a touch of taste. Two of the most culturally impactful reoccurring collaborations for fragment have been projects with both Nike and Starbucks. fragment was commissioned to partner with the famous coffee brand to design cups, a loyalty card and even whole concept stores to bring the fragment world to a whole to audience. With Nike, Hiroshi became part of the HTM (Hiroshi, Tinker, and Mark) project teaming up with Tinker Hatfield and Mark Parker to marry innovation and heritage to explore the company’s newest technologies across a wide variety of silhouettes. Other projects from Hiroshi alongside fragment include innovative temporary retail locations such as the POOL Aoyama, The PARK ING Ginza and The CONVENI, which reimagined retail in new locations placing stores within swimming pools, car parks and food convenience stores for a limited window of time creating a frenzy of excitement and rush to visit to buy special one off products for each project in new imaginative retail landscapes.

Fujiwara’s passion for product and branding originates from the life he has lived within it and the cultures he has become deeply set in from a young age. Being able to understand these times and what makes a product great then highlighting it even further has become Hiroshi and fragment’s signature move. Whilst the title “godfather” may elude that his time is in the past, the legacy of Hiroshi Fujiwara and fragment are still very much unfolding right in front of us with no signs of slowing down.

This Autumn Converse have worked with Moncler’s GENIUS 7 line and Hiroshi Fujiwara’s fragment design for a fresh take of the Chuck 70 in two colourways. The three-way powerhouse collaboration features special touches such as signature motifs from both brands and fragment’s usual tooling code detailing on both sides. The single colour canvas upper is accented with contrast stitching on the black pair and tonal stitching on the white pair. Additional detailing on both pairs includes side wall contrast piping, silver eyelets and a classic gum outsole to round off this low-key collaboration from three of the best.