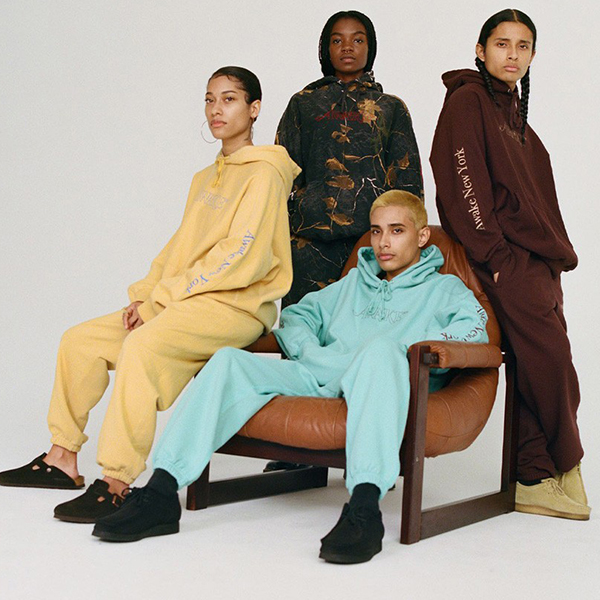 Ask any streetwear fan in one of the world’s fashion capitals about the best brands that are coming out right now and Awake NY is sure to be one of the first on their list. Striking the perfect balance between youthful energy, wearable designs and multicultural community spirit, Awake has truly become a brand that […]

Ask any streetwear fan in one of the world’s fashion capitals about the best brands that are coming out right now and Awake NY is sure to be one of the first on their list. Striking the perfect balance between youthful energy, wearable designs and multicultural community spirit, Awake has truly become a brand that represents everything positive in the modern streetwear and independent brand landscape in 2020.

It is difficult to begin the story of Awake without delving into the history of the brand’s owner, founder and designer Angelo Baque. Growing up in Richmond Hill, Queens with a keen interest in photography, fashion and the arts, Baque began to take the 1-hour subway ride down to Soho as often as he could, to delve deeper into his interests within the eclectic downtown scene. Mixing his love for underground hip-hop with photography, Baque got one his early breaks interning for The Source Magazine in 1997, shooting in the press pit at local shows. Continuing his path of following his personal interests and grinding for new opportunities, Angelo also interned with famed designer and long-time Nike collaborator Jeff Staple at The Fader Magazine.

Shortly after this period, the opportunity arose to work at the Stussy store on Wooster Street under James Jebbia, who was helping out with Stussy and Union alongside setting up Supreme at the time. This big break introduced Baque to a new world which stretches further than New York, witnessing customers travel in from the UK and Japan to source the ultra-rare New York wares on offer before the internet properly made these items more accessible. In 2003, at the height of this new streetwear movement, Will Whitney (now Noah NY crew) who was the manager at the time, asked Baque if he would like to start working at his new unique retail store Nom De Guerre and also bring his DIY t-shirt brand and precursor to Awake NY – Absurd, with him to stock at the store. This golden opportunity taught Baque firstly how to run a store but also how to create a world within a store and be able to put customers on to new brands as they emerged. This early adopter and “buy what we like” attitude meant NDG was decades ahead of the curve in many senses, shining light to new brands at the time such as Rag and Bone, Common Projects and Corpus alongside mixing this offering with staples such as CDG, A.P.C. and more. Baque’s ‘multiple hat’ role at NDG also included him shaping the first four seasons of the in-house NDG line and setting up in-store art photo installations with photographers such as Maripol, all whilst releasing t-shirts in the store under his label Absurd. One of the most popular tees released by Absurd was a bold graphic print depicting Patrick Ewing stood next to the Twin Towers – a instant must have for any true New Yorker.

This multiple skill experience paved the way for his next chapter at Supreme. Working at the brand from 2006-2016, Baque’s role as brand director helped steer the once underground skate shop to become a household name for many. With responsibilities ranging from giving direction and input to each seasons designs, to shooting editorials across the globe and the seasonal lookbook in Tokyo twice a year, Baque created a global network of creatives and influence which only a handful are blessed enough to experience. This whirlwind decade was captured in snapshot moments through his now defunct blog SomeDueSomeDont.

During this period and following on from the now retired Absurd brand – Awake NY was born as a side project during the Supreme era, which in the first few seasons was only available in small drops at retailer Ships Jet Blue in Japan. Awake NY began for Baque as a way of keeping his creative juices flowing outside of his day job and also provide and create items that he couldn’t quite find anywhere else. In 2016, the first Awake product to be available on American soil was a simple yet bold 6-panel cap in a variety of colours, available online and also in limited quantities at Union and Noah. A unique factor of this monumental release was that all proceeds from the drop went directly to help pay legal fees for the Standing Rock Sioux Tribe cause, this was both the beginning of Awake as a brand in the US and also a brand that promotes philanthropy whenever possible.

Shortly after exiting Supreme in 2016, Baque’s first global collection for Awake NY was launched whilst also working on his own creative agency, Baque Creative. This saw work shift between creating new collections for Awake, whilst also consulting for a rotation of clients such as Supreme, Nike and Converse. With each Awake release selling out in record times and to critical acclaim, the pendulum began shifting to working on Awake as his main project. The launch of Awake also tied in with Baque’s own personal journey down his path of sobriety, with the brand name fittingly matching his mindset through the years. Being deeply connected to the downtown scene for decades, Baque has been able to bend the traditional boundaries of high end and streetwear in all his work. Priding himself on every product he creates and making sure it can be best around from a design and also relevant cultural reference standpoint, with historical figures such as Michelle Obama, Nelson Mandela and Angela Davis featuring on the brands t-shirts.

Speaking to GQ in 2018, Baque stated “When you buy into Awake, you’re also buying into being socially aware, socially active” – this message rings even more true now than ever, with one of the biggest aspects of the brand being a ethos of inclusivity, opportunities for the youth and giving back whenever possible. With the young discerning consumer being even more socially conscious in 2020, over the last few years Awake has been able to capture this and provoke the message that where you spend your money is important and every dollar counts, with local charities and black owned business being at the forefront. Standout efforts from Awake have included donating proceeds from their drops to the Queens based New Immigrant Community Empowerment (NICE) organization, Equality for Flatbush – a grassroots organization ran by people of color which works to advocate against an array of social issues and also producing collaborative products with Dan Colen’s Sky High Farm – a non-profit organization improving access to fresh, nutritious food for New Yorkers who are living in underserved communities. In conjunction with these charitable efforts season in, season out, Baque has curated multiple iterations of the acclaimed pop-up activation Social Studies to inspire young people and to give back to his community, with lectures on the history of streetwear and advice on how to start your own movement though hands on workshops. Recent events have taken place both New York, Miami and fully digitally in light of the COVID-19 pandemic, with a star studded panel of contributors such as Jerry Lorenzo, Virgil Abloh, Chris Gibbs, Shaniqwa Jarvis, Melody Ehsani and more.

Alongside their strong focus on giving back to the community, the brand has built up a strong roster of collaborative partners such as Carhartt WIP, New Era, Reebok, ASICS and Levis to name a few. With each one of these special projects only lasting on the digital shelves for a few minutes, it’s clear Awake has been able to communicate their youthful modern spirit into each project and re-create iconic staples such as the Levi’s Trucker Jacket in their own unique way.

Following on from recent collaborations with New Era and Dan Colen’s Sky High Farm, Awake NY present their latest collection for AW20 which continues the brands aesthetic of youthful and provoking graphics, alongside a selection of unique knitwear and shirting options. Standout items in the collection include the Hearts Harrington Jacket, Heavyweight Barbed Flannel Shirt and the Angela Davis Graphic T-Shirt – which celebrates the activist, philosopher, academic, and author who gained fame as a militant American black activist championing the cause of black prisoners in the 1960s and ’70s.

The Awake NY AW20 Collection is online now at HIP.