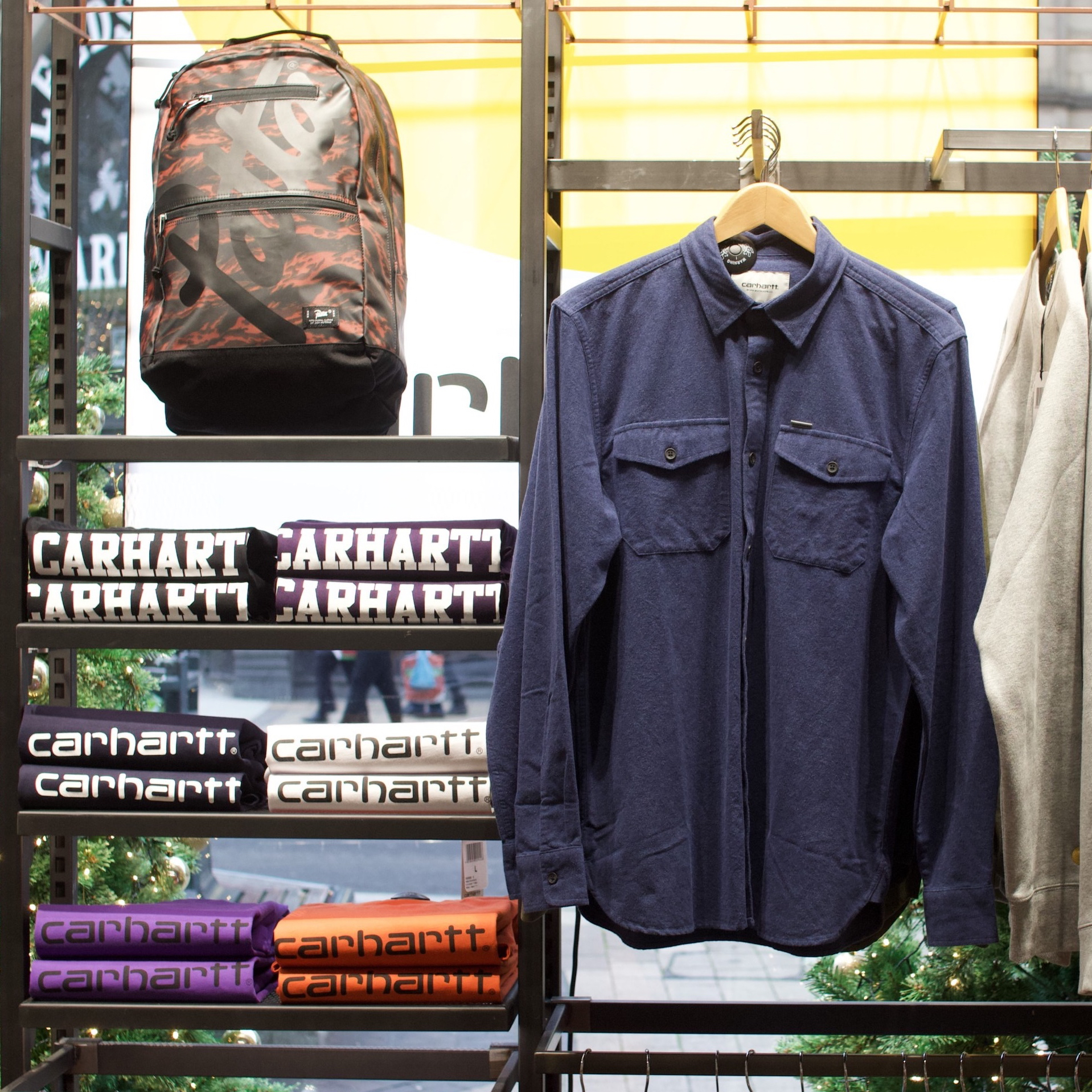 Over the Christmas period, The Essential Journal stopped by to visit our Leeds flagship store and spoke to long-serving staff member Robin about how things are going and also how he’s seen The Hip Store and trends evolve over the sixteen years he’s spent at the store. Something of a Leed’s fashion institution, The Hip […] 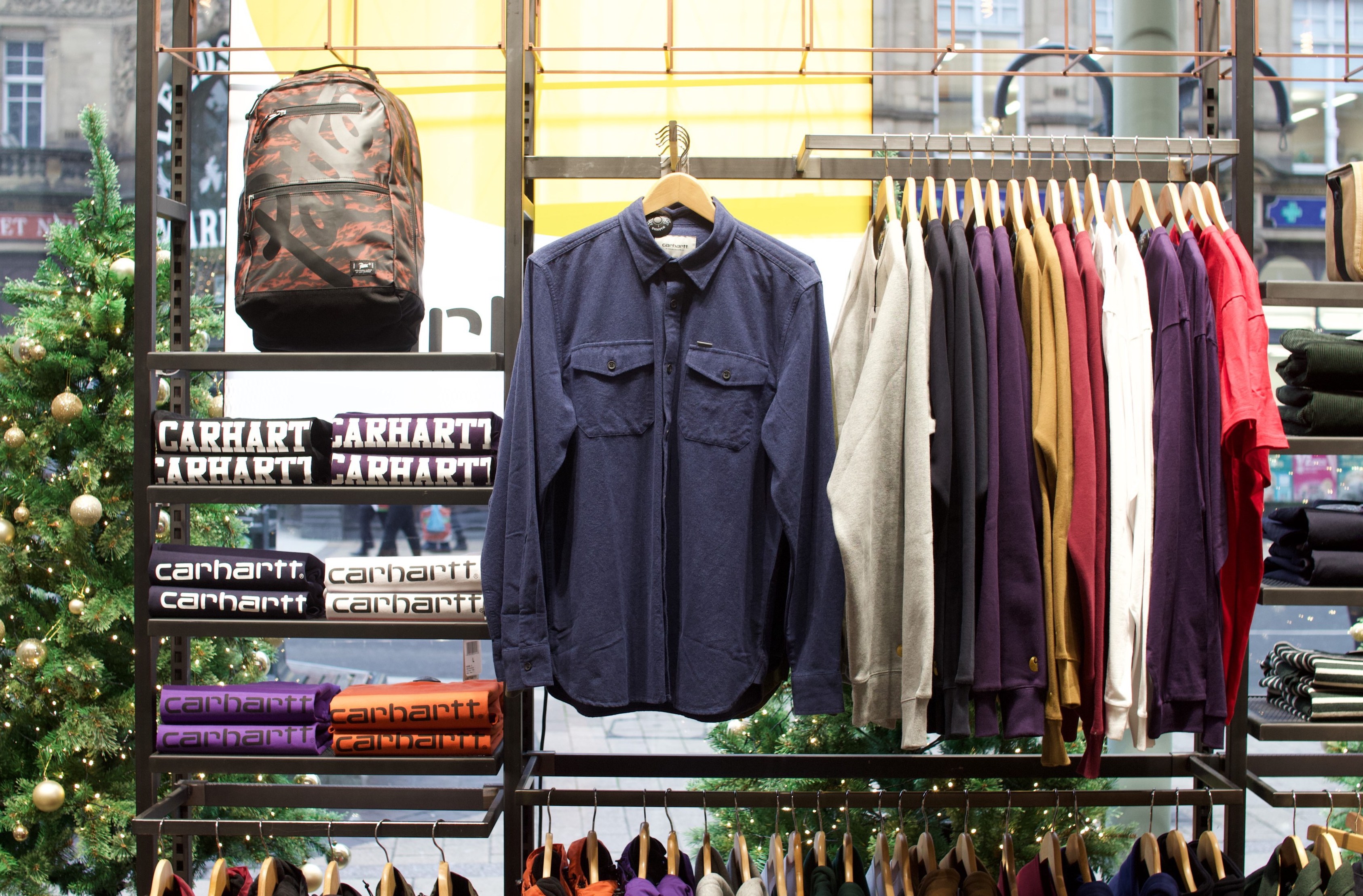 Over the Christmas period, The Essential Journal stopped by to visit our Leeds flagship store and spoke to long-serving staff member Robin about how things are going and also how he’s seen The Hip Store and trends evolve over the sixteen years he’s spent at the store. 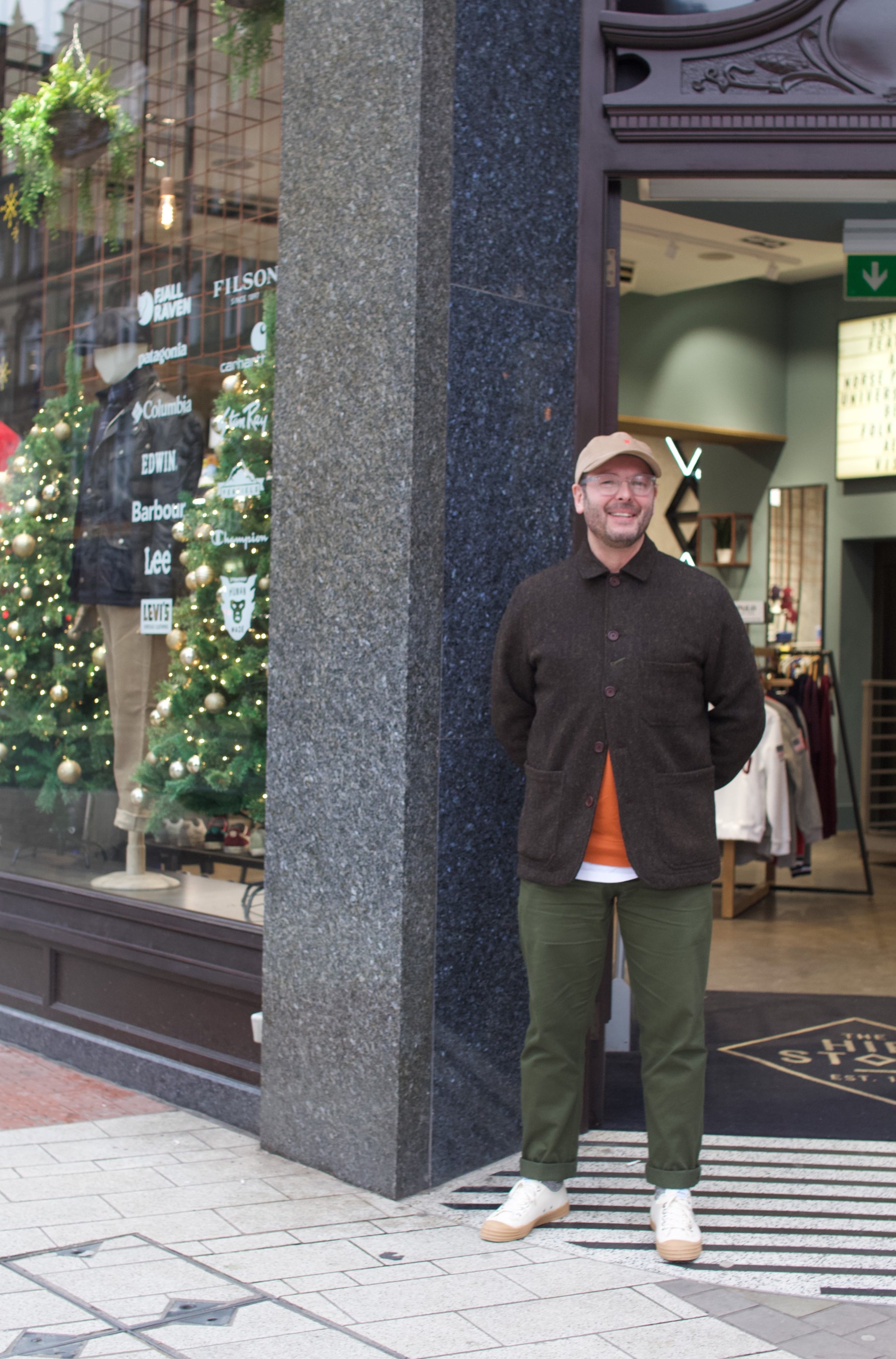 Something of a Leed’s fashion institution, The Hip Store needs very little introduction. Established over 30 years ago, The Hip Store has gone on to be one of the most respected stores in the casual, streetwear and heritage scenes. With their all-new, three-floor shop now in full swing, we catch up with Robin Jeffrey to talk about the evolution of menswear, and the benefits of a buy less, buy better mentality. EJ

First off, tell us a little about yourself.

I’ve been working for the company for 16 years I think. From when we first started out in Thornton’s Arcade. So I’ve made the trip from Thornton’s Arcade, to Trinity, to Vicar Lane, to here. Because I’ve worked for the company for so long, people tend to recognise me. That’s why I tend to spend most of my time on the ground floor, though I do float around the place: It’s nice to welcome in the familiar faces.

How are things at the new store going?

We’ve been here two months now and it’s looking great. Last month was our 35th anniversary, so this is a nice little present to ourselves. To survive for so long as a smaller, independent business is a real achievement. So we feel very lucky. And now that we’re bigger, we’re lucky to have maintained the same sense of independence. We still have total freedom over how we operate and buy, we still have our own team of buyers and we’ve built some incredible relationships with the brands that we stock. So these three floors are kind of a celebration of that growth and those relationships.

How are the garments at the higher end of the price scale received?

Naturally, when you’re lucky enough to stock brands like Visvim and Engineered Garments, you’ll always have people come in and go ‘how much?! What’s that all about?!’ And that’s fine, we’re here to educate, after all. Once you explain to people what it is exactly that sets these garments above the rest then there’s a better understanding.

We’re in a great position right now, we’ve got a floor for everybody. You can pick up your t-shirts downstairs for 30 quid or come up here and spend 700-800 quid on a bigger piece. They are investment pieces aren’t they really? That’s how we see it. You know, if you’re coming into town a couple of times a month to buy a couple of t-shirts to refresh your wardrobe then that’s fine. We’ve got that covered too. We don’t expect everyone to come in every couple of weeks to buy a winter jacket. 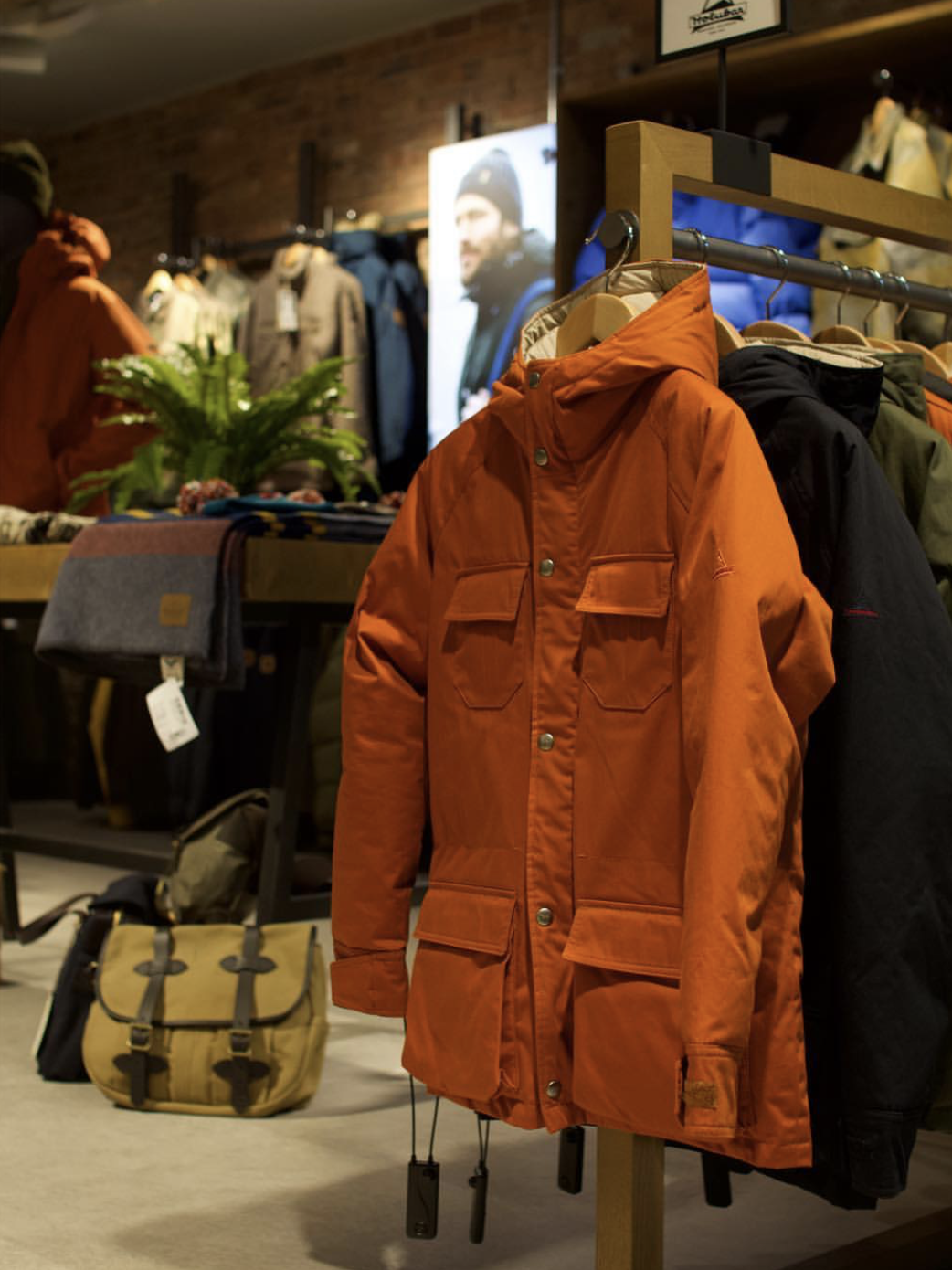 Would you say that your customers are a little more clued-in to what they are buying?

Oh yeah! For a lot of the guys that shop here, it’s more of a hobby. People get really into particular brands, and they really know their stuff! Having been around for so long, we’ve seen people rise through the ranks as it were.

We’ve got customers that used to come in 16-17 years ago that now have mortgages and kids. You’d think they’d have less and less money, and some definitely do disappear for a few years until they get their kids shipped off to uni. But they’ll still swing by to pick up some of the bigger releases. As I say, it becomes a bit of a hobby.

Do you think that comes with a certain community aspect? A sort
of ‘If you know, you know’ kind of mentality?

[Laughs] There is the odd nod of recognition when you’re spotted in something from Beams or Folk or what have you, because it really takes a keen eye to spot their branding sometimes.  But generally it’s not all that pretentious. Yeah, you do need to educate people sometimes, but that’s a great part of the job. Some people will come in and will be amazed by a price and it’s up to you to explain why that piece is worth that sort of money and the design process behind it and fabrics that are used, and its cost effective to buy it because you will make sure you wear that as opposed to chucking it in the wardrobe and never seeing it again.

Is that education side of things ever a challenge?

As long as you have staff in that know what they’re talking about you’re sorted. And we definitely have that. Just play it cool play it natural. No one wants to be forced into a purchase, and no one wants to sound like a used car salesman. So it pays to have a genuine interest in what you’re selling. It’s easy to sell someone on the virtues of something you know and love yourself!

How do you pick your staff?

[Laughs] A lot of them used to shop here! I know they say never employ a customer because you lose that customer, but you can’t beat people who already have a genuine understanding of what the shop is about. They get what we’re doing, and they know how to pass that passion on to others, because it’s a genuine passion. We’ve often asked a few of our regular customers if they’d like to do a little stint with us over Christmas or what have you, just because they’re really into the brands and they’re chatty and approachable.

Where does The Hip Store fit in with the idea of buying less but
buying better?

It’s how we’ve always operated. You don’t need to have a lot of things in your wardrobe. Just build towards a nice capsule wardrobe, you know? You’ve got a pair of jeans, a smart pair of white pumps, a pair of chinos a tool jacket, a couple of nice shirts a couple of t-shirts.

In this day and age it’s easy to move things on, so it’s in with one and out with another. If you feel like you want to get rid of something, you can give it to a friend or stick it up on the internet or whatever. You can get rid of it and that funds the next purchase right? It didn’t used to be quite like that, you’d probably have taken it to a charity shop.

Have you noticed any big changes in customer traits over the years?

That’s a bit weird actually: Everything used to be quite label orientated. Not so much any more. I mean, people still buy into certain brands but they don’t want to see their branding splashed all over the garment. The rise of Scandinavian brands like Our Legacy and Norse Projects have ushered in a more minimal, less-is-more attitude.

Do you have a particular stand out customer who is a bit of a character?

Loads! You can’t be in this business for this amount of time without a few stand outs. I like to think we recognise people day in day out in store. We’re on a first name basis with a lot of our customers. 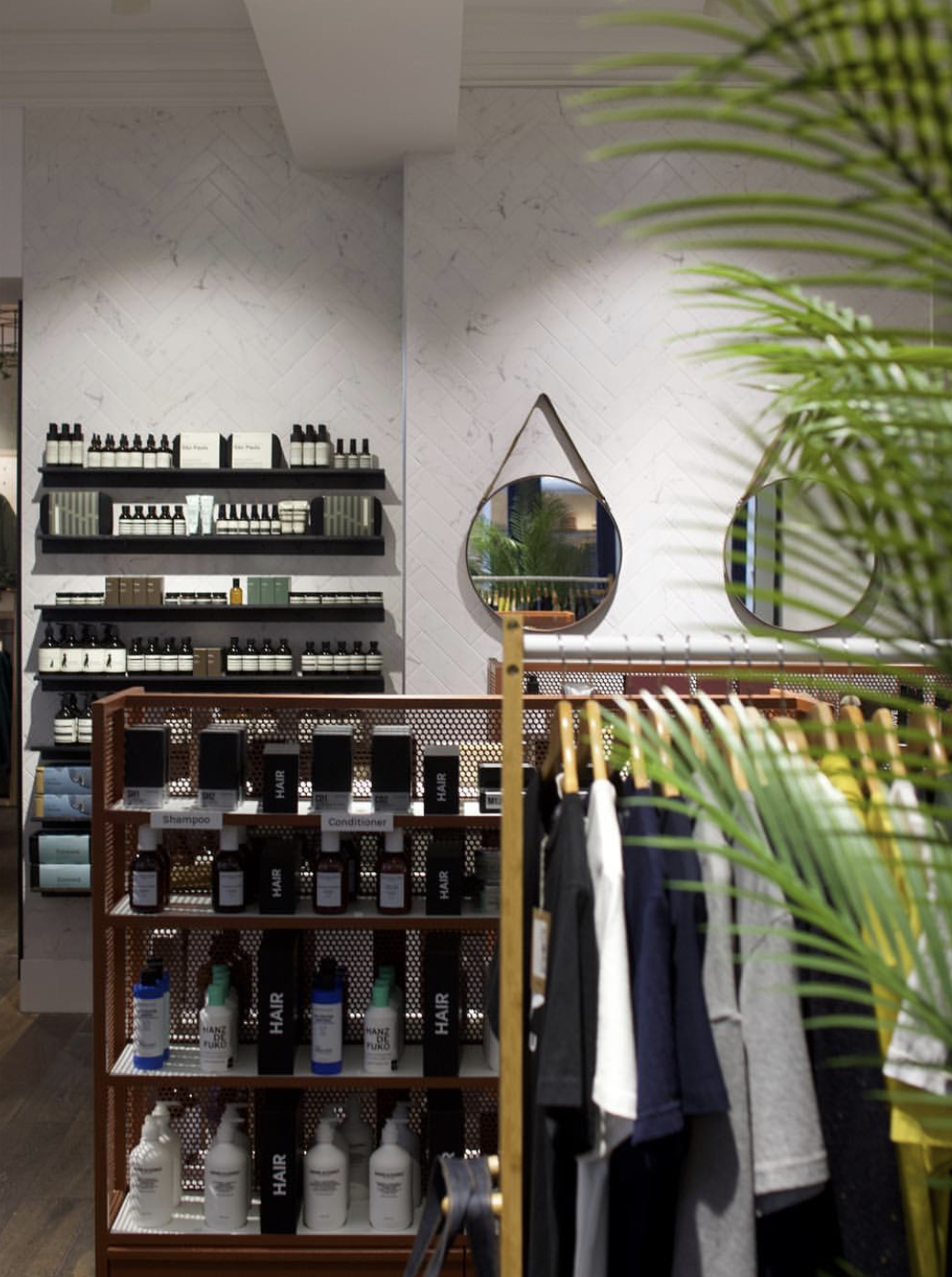 Do you notice any trends coming through in Leeds and beyond?

Slimmer trousers are on the way out. We’ve been saying this for the last two or three years. People are starting to favour wider and shorter cuts. We knew that maybe three years ago, but it always take a while to filter down to the consumer level. And that’s funny because it took so long to get guys into slimmer jeans. When you’ve been in this business for as long as I have, you can really start to see the cycle. Things going out of fashion for a bit and then cycling right back in. And that’s why we say don’t throw anything away: Keep hold of it all, it’ll come back around!

Our basement  floor is quite amazing in that respect actually. You have a lot of outdoor pieces that have become fashionable by default haven’t they? Brands like Battenwear, Manastash, Patagonia. Look how big Patagonia has become in the past 5 or 6 years. I was brought up in the Lakes so for me it was almost like a right of passage. You got to a certain age and you were given your Patagonia, that was your first coat. Same with Barbour. Clarks as well – they were the smart and practical option as a kid, but that’s a different story now. We’ve got a Clarks x Wu Tang collaboration downstairs! The evolution of it all is amazing.

What are the stand out collaborations that you’ve done over the years?

Oh, we’ve done a fair few, and I think we’ll be looking a doing a few more down the line. Not my decision at the end of the day; it’s down to the buyers and powers that be. But yeah we’ve done a few Norse Projects colabs before, two or three Universal Works collabs too. We’re hoping to work with a few footwear brands somewhere down the line too. When you’re a smaller shop it can be hard because you’re expected to buy a certain amount of stock. But we’ve grown up a lot over the last 30 years, we’re bigger now, so it’s exciting to explore those collaborative opportunities a little more

So say someone walks in for the first time, they’re new to it all. How would you kit them out?