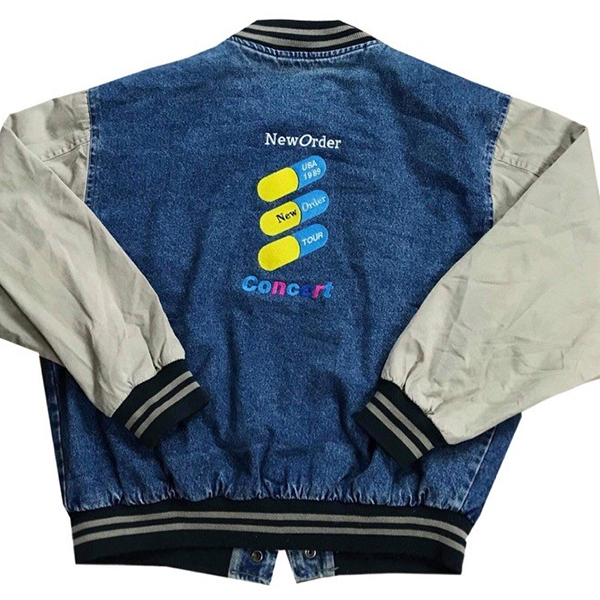 In conjunction with the release of the adidas Spezial AW20 Chapter 2 _nwrdrSPZL collection, we caught up with vintage dealer Ladi Kazeem of TheVaultMCR to delve into the deep history of vintage New Order merch. Hi Ladi, please introduce yourself and The Vault? My name is Ladi Kazeem i’m currently living in East London but I’m originally from Saltburn […]

In conjunction with the release of the adidas Spezial AW20 Chapter 2 _nwrdrSPZL collection, we caught up with vintage dealer Ladi Kazeem of TheVaultMCR to delve into the deep history of vintage New Order merch.

Hi Ladi, please introduce yourself and The Vault?

My name is Ladi Kazeem i’m currently living in East London but I’m originally from Saltburn a beach town in the North East of England a stones throw away from Middlesbrough. I started TheVaultMCR in 2014 – to be short my landlord at the time came to pick up my rent from my then bedroom and got a shock of her life as it was literally wall to wall vintage clothing. She then spoke to a friend who owned a shop in the Manchester NQ incognito which is now FLOK and he offered me his basement free to store all my vintage and sell from for free as long as I cleaned out the basement. The name the vault came from the fact that there was 10×10 cast iron bank vault in the basement and that became the centerpiece of the space.

You previously worked in a traditional vintage, how did this progress to selling tees full time?

The progression was really easy from 2007 to around 2014 I sold everything and anything I believed was valuable to keep my head above water there was no curation to it or interesting methodology especially at the beginning. It was all about survival, buying and selling was my only source of income and essentially became like a safety net. Around 2014 I fell upon a deadstock spot whilst partying with friends in Amsterdam and literally it was like how i’d imagine winning the lottery would feel – a small shop in plain sight with some of the best t-shirts in the world tucked away at the back behind miscellaneous oddities. I went back and forth to that spot for the next 4-5 years just buying t-shirts I believed were valuable and then over time I found myself learning on the job and educating myself on different genres of music. I grew up listening to shoegaze, brit pop and of course hip-hop so with the other genres available to me it was almost trial and error. I very quickly found myself in situation where there was so much demand for what I was selling it didn’t take long for me to have a network of serious buyers globally who’d buy anything I wasn’t personally interested in and in bulk so it meant I could almost give anything a go. The progression to working for myself full time happened organically without me really having much time to think about it.

You also recently started a rare poster brand also, how did this come about?

The t-shirt market has been overly saturated for a while now and it’s becoming increasingly harder to find t-shirts at a reasonable price let alone affordable so I’d been looking to diversify for a while into something that my client base could relate to. Posters seemed like the most natural choice I lived through the era so many people reference now 90s-00s and when I was growing up t-shirts, posters and magazines all came hand in hand. At the moment there’s not many people within the vintage t-shirt community actively selling original posters and I’ve actually noticed since I took the step and gave it ago a lot more dealers have followed suit as it’s a no brainer really. There’s a lot of t-shirts out there that I’ll never be able to find but at the moment that’s not the same with original posters.

What gives you the biggest buzz – the sourcing or the selling?

Sourcing of course I think anyone who works within t-shirts or more broadly vintage and does their own sourcing will agree with me that’s kind of why I’m in no rush to expand my team and turn this into a operation where I have no creative input and hand it all over to people to make money for me, where’s the fun in that? Some of my best finds have been from vintage shops in the UK where the stock comes in bails and the staff members just stick the t-shirts out like you would in any retail operation. They’re not being paid to know above and beyond what they’re selling so people like myself clean up weekly just checking every vintage store routinely. I’ve literally found some of the rarest t-shirts on the current market worth in thousands sat collecting dust in a vintage store bargain basement.

Buying and selling tees online seems to be constantly changing with virtual auctions on IG live a normal occurrence since lockdown, where do you see selling vintage tees going next in terms of innovation and community?

Well with the vintage t-shirt market specifically it doesn’t really matter who you are if someone comes across you and you have rare items at an affordable price you’re always going to be quids in. The issue is with all these algorithm base platforms and a more saturated marketplace it’s becoming harder and harder to just find dealers online. It’s like when I first started selling t-shirts online socially I didn’t have a presence but having said that there was literally no competition especially in the UK, in fact my only competitor sold t shirts 3 times the price of mine so I’d sell out daily. But now again with a more saturated market presentation, curation, quality and knowledge of what you’re selling is key to stay relevant and different ways of selling like online auctions or popups or yard sales where your connecting with your buyers and then it becomes more personal. I wouldn’t be surprised if vintage auction houses began to spring up all over the UK with the same principle of any auction house, people bidding up items and an auctioneer with a hammer having the final say.

You were based in Manchester for a time, how was that for finding New Order tees and other Manchester related band tees?

The North of England and Manchester specifically is like nowhere else in the world everyone has got a story to tell anyone from Salford will tell you they know Peter Hook New Orders bassist and every grafter especially at the united and city games will have sold at some point in there illustrious  bootlegging careers a New Order t-shirt – so if they don’t have one themselves to sell they’ll know somebody who will and that’s how Manchester worked for me.

Do you have a person favourite New Order moment?

The US tour in 1989 was iconic for me mainly because of who they were touring with which was Public Image Limited and Sugarcubes which included a young Björk who in t-shirts terms are both pretty iconic. Cubes t-shirts are quite valuable but Björk t-shirts are on another planet and extremely sought after. I think any football fan worth his salt will have heard or know about the 1990 track “World In Motion” where John Barnes spat some lyrics again which was iconic.

What’s next for the vault?

I’m heading back to the North next year and then who knows hopefully COVID’s a thing of past come next year and I can get back to travelling the world unearthing lost relics in dusty deadstock spots. There is no timeframe none of this needs to be rushed in my opinion I’m just doing what I enjoy and thankfully being able to live reasonably in the process.