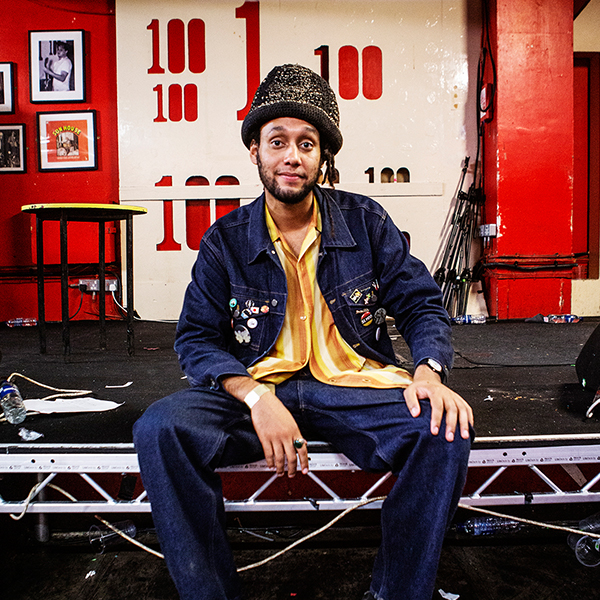 Following on from working together in SS20, this AW20 Fred Perry has joined once again with London based designer Nicholas Daley to create an expansive collection which is based around Fred Perry’s archive and expands into the brands musical heritage alongside the mixture of reggae and punk in his lifetime. HIP sat down with Daley […]

Following on from working together in SS20, this AW20 Fred Perry has joined once again with London based designer Nicholas Daley to create an expansive collection which is based around Fred Perry’s archive and expands into the brands musical heritage alongside the mixture of reggae and punk in his lifetime. HIP sat down with Daley to discuss the collection, growing up around music and first connecting with Fred Perry.

Hi Nicholas, firstly thanks talking to HIP about the collection. Music runs deep in your family roots with your parents creating a reggae club for their immediate community in Scotland, a genre which is a key part of this collection with Fred Perry.  Which records do you remember being the soundtrack to your youth growing up?

Yeah, I think for me, music plays a part an integral part in my life, and I think, it’s something which my parents, exposed me to, with lots of different sounds early on, whilst I was growing up. I was born in the Midlands in Leicester, but my parents met in Scotland and that’s where they ran the reggae club from 1978 to 82. So during that time my dad got a lot of Trojan records and white labels, they used to put on a lot of root British reggae bands, like Aswad and Musical Youth, they were definitely about bringing people together through music and it wasn’t really a massive financial thing for them, they just sort of ran the club because they wanted to, and they felt there wasn’t that type of music being appreciated or being played enough in and around Scotland at that time. All those records and vinyls, my dad kept hold of and he’d be playing them a lot in our house. My mum, was really into folk like Bob Dylan, Joni Mitchell and Leonard Cohen and all these type of guys. So yeah, I definitely had quite a nice diverse, rich kind of musical upbringing. And then I guess then my own taste, from either older hip hop – I used to listen to a lot, like – Tribe Called Quest and things like that. And then right through to the more indie rock stuff, people like Placebo, Radiohead, etc. It definitely came through in some of my work and I think that’s why the Fred Perry collaborations work so well from a garment perspective, but also from a storytelling side. Fred has been an integral part of British sub culture and their support with music. So I definitely feel like that kind of sub cultural narrative, if something very important to my brand’s DNA and also important to Fred’s.

Tell us about your relationship with Fred Perry, how did you both first connect? From an outsider’s perspective the UK heritage and shared interest in British manufacturing is an instant link.

Well I used to work for Nigel Cabourn and they did a Perry Collab while I was there. So I met a lot of the team in my previous work, which was really great. And then also just lots of different little ways really that were sort of connecting with Fred. My girlfriend Nubia, she’s a DJ producer, like radio presenter. She also did some stuff with Fred I’ve been to some of their subculture nights as well. I also met some of their team, whilst I was working at Dover Street, before we started my brand. I worked there when I was still at St. Martins and then when I graduated as just as a retail sales assistant. The Fred Perry relationship was kind of built through various different connections, and even down to Don letts, I kind of met Don through Fred Perry and then we shot him in some of my stuff. He’s played and DJ’d at the last Fred Perry event last year, it’s just like lots of different avenues, I think that’s always a good sign whenever you’re doing a collaboration, they organically snowball and conversations are made, and then eventually it kind of comes to a point where you think, let’s make this happen. The product is really important, but also at the same time, they’ve be really supportive of all the creative assets and doing the hundred club party and everything we’ve done in and around the projects, they’ve always been really supportive.

The collection riffs on the connections between both punk and reggae, two subcultures that both have deep roots in the British landscape, what are the key connections you would like to highlight that others may not initially see across the two genres?

I think for me, it’s just about rebellion in it really – it’s just like reggae is just there to be loud and the same with punk music, so very antiestablishment. So I think that’s probably the biggest connection between, the two kinds of musical genres. I’ve been lucky enough to speak to the Elders, like Don Letts, Dennis Preval. So I’ve been like really listening to their stories, even my parents, they went to the rock against racism events across in London. Where they had both reggae and punk/rock acts playing all under the same bill. So it’s something which I’ve always been really interested about and this kind of interchange between different movements. They’re all kind of coming from the same kind of place – basically kind of what I say is like one tree different branches. Then for the research, I just looked at icons, like John Lydon – I really liked the stuff he did after the sex pistols with Public Image. I think that stuff’s really, really cool – and all the soundscapes, it’s a lot more bassier and dubbier, kind of definitely those dub reggae influences in there. And then looking at photographers like Dennis Morris, who did a lot of stuff with Sid Vicious and the Sex Pistols. His imagery is always really, really great to look at. He did the pill book as well, which was really cool. A lot of those Bob Marley’s shots you see are Dennis’, so his stuff is always great to look. Then also, just looking at people more, my contemporaries – Obongjayar, who’s wearing the collection, he’s definitely an artist who I feel is blending, his Nigerian influence with the British subcultures with reggae and dub or punk all this different stuff. And that’s why I kinda asked him if he’d be up for wearing the collection. Cause I feel like he fuses lots of different elements for our generation. So that’s kind of where all the inspiration came from really and kind of how I’ve been exploring these 2 musical genres, and how I picked the characters, which I think sort of celebrated it.

For the design process, how was it diving into the archives of Fred Perry and being lucky enough to re-work silhouettes that have been British staples for decades?

Whenever I’m doing these collabs, myself and the team will go into the Fred office and we’ll have a look through their archive and see what styles we like, or particularly embroidery or stitching or colourways and we both knew that checks and tartans would be something, well I wanted to push, more on this for this season. So we kind of developed that with the team and we did it in like a towelling. We did some socks as well, which were quite fun. So definitely had that tartans story in there – with my mother from Scotland and my parents lived there running the reggae club as a nice, ancestral kind of connection. And then right down to the classic pique polos – playing around with colours and then we did our heavy down jacket with this two-tone nylon fabric, which is really great to do such a sort of strong outerwear piece. The football scarf was quite fun as well, I like doing these little accessories that was in tartan and plaid. We had illustrator Gaurab Thakali, who I’ve collaborated with on quite a few seasons now, he did some bespoke artwork, which then was embroidered on the scarf and the socks. We also did a little zip knit, which was nice in the navy and ecru. So yeah, this is definitely the biggest collab we’ve done together. So there’s a nice mixture of different techniques and elements. But it all starts from going into their office and a hunt for things which I’m inspired by, and chat to their team about what they also feel would be really strong to look at too. So yeah, again, another quite organic process, which is good. I just spent a whole day just sitting there just in their room, just digging away, it doesn’t sound like everyone’s cup of tea, but for me that’s always a fun day in my schedule – I’m normally looking at spreadsheets so a nice break from that.

Your rise through Central St Martins has been well documented and is inspirational for UK based students looking to get their own start or brand in the industry, do you have any advice for young people who are looking to follow your path?

I think ultimately, you just really need to believe this is what you want to do, I’ve kind of sacrificed a lot of time and energy to grow the brand and I’ve been doing it really slowly. I had some time with Nigel Cabourn, which was really great to kind of see how a men’s wear brand works and all the ins and outs. So I definitely think preparation is really crucial, like with anything in life, really just knowing what you’re getting yourself into. But also you’ve got to have a story and a narrative, which you feel strongly about because ultimately not everyone’s going to like your work, but everyone’s gonna understand it, but as long as you believe in it, and it’s kind of what you want to say, then that’s obviously really, really important and especially think now in the climate we’re in with the cultural changes. So you have to be thinking now, especially you have to be diversified and get as many skill sets and different things which you’re interested in because we’re definitely in a new world in terms of how we can operate. but nothing’s impossible, it’s all down to hard work. And I think that’s what I kind of learned from my parents – my mum, she grew up sleeping on a couch to stay in Dundee. And my dad basically lived in the mountains in Jamaica and they both had basically nothing. They’ve sort of made their lives better and obviously for me and my sister, and then I was able to do what I wanted to do, but I think that kind of work ethic, is probably the main thing you need, if you’re gonna sort of push on and kind of get on within the design world, cause it is very competitive and it is very hard and there’s a lot of time and hours you’ll need to put in, if you want to start your own brand. but you know, that’s kind of something which I feel anyone who wants to, they just need to think about all those things and obviously have a financial plan as well. Which always needs to be, considered, but yeah, hard work, perseverance and a good narrative with a good vision, I think is the backbone to it though.