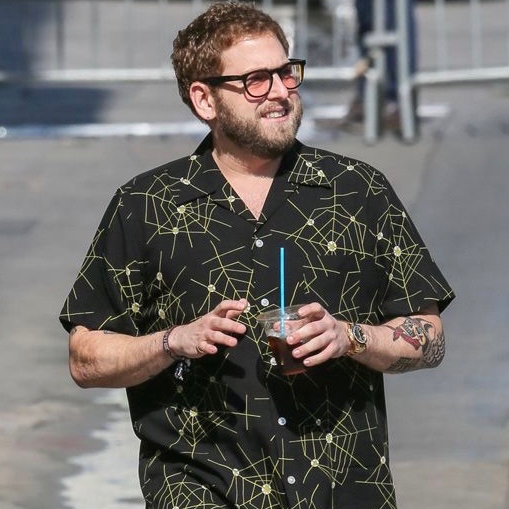 In line with the launch of his signature adidas Originals Superstar this week, we decided to take a dive into the world of Jonah Hill, the newly favored style icon for many. When Jonah Hill first appeared in the noughties classic Superbad, it didn’t seem like he would progress into the Wacko Maria Camp Collar wearing […]

In line with the launch of his signature adidas Originals Superstar this week, we decided to take a dive into the world of Jonah Hill, the newly favored style icon for many. When Jonah Hill first appeared in the noughties classic Superbad, it didn’t seem like he would progress into the Wacko Maria Camp Collar wearing bicoastal menswear icon we know today.

As Jonah flowed from his Superbad and Pineapple Express era of hoodies-and-jeans, he then merged into the next early internet trend of poorly fitting blazers, bad shades and popped collars. Even with this rocky road in mind, the main factor to take away is that the most stylish thing a person can do is never care too much about what they wear and enjoy it. Much like fellow lauded actor Shia LaBeouf, Hill presents himself as someone who takes pleasure in dressing himself and taking risks, as opposed to using a stylist.

One of Hill’s prevalent points of interest has always been skateboarding – many brands and silhouettes all direct back to that classic 90’s skater look. Which is at high peak in fashion now and one of the viable explanations for Hill’s own rise as an unlikely style icon. Trousers and jeans are often wide legged which adds further to his laid back feeling. When pressed in countless interviews, Hill has said many a time he doesn’t really think about what he’s going to wear, but he does like to support brands he feels a connection with which is always the way to go – this attitude has led to a result of savvy mixes of streetwear and high-fashion.

Another factor is being on the go – many city-living celebs in LA are driven to and from where they need to be, in contrast on the east coast, Hill sticks to the NY lifestyle and walks everywhere. This results in the ambition to wear comfortable clothing to look and feel good, think lightweight shorts and camp collar shirts that mix the two needs effortlessly even in the heights of Summer heat. Seeing Jonah on the street in his day to day, rather than a fake LA photoshoot creates a relatable, accessible, and achievable feel to many of his looks.

In his very own way, Jonah Hill is shrugging off the rich, handsome, highly filtered image of Hollywood that’s been turning actors into faces with little personality for decades and taking a new looser individualistic approach to personal style.

One example of the fanfare around each outfit put together by Hill is the Instagram account @jonahfits – which is run by a mysterious Jonah Hill fan, reported to be in his late 20s and works in finance. The account is exactly what it sounds like — a daily visual diary of the actor’s looks. “I honestly figured a Jonah Hill style Instagram would have already existed by the time I searched for it,” stated the creator. “Once I saw there wasn’t I knew there would be an appetite for it so I created it.” When pressed to his reasoning to why Hill resonates with such a large crowd he explains “He’s also a part of skate culture so that’s what so much of his style is based upon. His authenticity is what separates him from so many other celebrities.”

As shown with the Jonah’s Fits account, Hill’s infamous style has attracted a strong following, fashion podcast Throwing Fits has long been idolizing Hill as a symbolic figure in menswear to the point of creating a dedicated ‘Jonah Hill Day’. Hosted by Lawrence Schlossman (Former Complex and Grailed) and James Harris (Former Complex and Def Jam), Throwing Fits is described as a podcast that is “two grown dirtbags just trying to navigate the millennial male zeitgeist” with a typical listener of 20-30 something year old with a keen interest in style and surrounding matters. The podcast delivers episodes on a weekly occurrence to both a free audience and also bonus episodes to their dedicated paid Patreon subscription base. Iconic past episodes include discussions with Jonah himself, Ezra Koenig of Vampire Weekend and Union LA’s Chris Gibbs.

The first Jonah Hill day in September 2017 took place during NY fashion week at popular bar Kinfolk 90, equally serving as a light hearted meeting point on the day for fans of the podcast. Fast forward to 2018 and Jonah actually showed his face leading to mass fanfare and disbelief to those in attendance, allowing everyday fans and fellow style enthusiasts the ability to meet someone they look to and further hammer home the fact of his regularity and relatability. When asked by The Cut Magazine on the day, Harris summed up the mood of the appreciation well “He’s the ideal we all aspire to be – he’s just doing his shit and dressing well while doing it.”

Though newly added to the adidas Originals family, Hill started on a high note as he expanded his portfolio directing the star-studded Superstar campaign which featured the likes of Blondey McCoy, NIGO, Pharrell – all who have released their own take on the shoe. Now it’s his time to put his own stamp on the iconic shoe – the Jonah Hill Superstar creates an organic connection to Jonah’s own childhood influences, inspirations, and points of reference. Speaking on the design inspiration Jonah explains the creative process and his personal relationship to the silhouette: “I started thinking back to all the experiences I had growing up while wearing them, and tried to make my fantasy version of what I would have wanted when I first wore them.” Directed by Jonah’s upbringing on the West Coast during the 1990s, the collaborative Superstar sneaker honors the creative’s love for the original silhouette while adding his own unique aesthetics to it. Blending sophisticated lines with a homemade punk aesthetic.