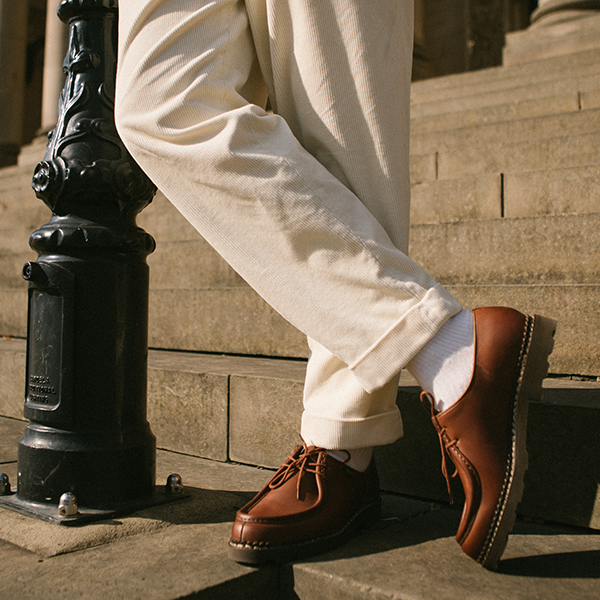 Founded in Paris by way of the Alp-straddling village of Izeaux in 1908 by Remy Richard, Paraboot has grown over the last century to become one of the most respected French footwear brands around. The Paraboot ethos is to craft footwear that can last any form of walk no matter how far, thanks to the […]

Founded in Paris by way of the Alp-straddling village of Izeaux in 1908 by Remy Richard, Paraboot has grown over the last century to become one of the most respected French footwear brands around. The Paraboot ethos is to craft footwear that can last any form of walk no matter how far, thanks to the use of the famed Norwegian welt to join the soles and the uppers. All French made and manufactured other than the finest rubber soles which have been carefully selected and shipped in, Paraboot’s range of shoes and boots can be relied on all year round. Priding themselves in their French manufacturing, Paraboot’s craft has been grounded in the historical background of the French industry, a human adventure, made possible by the combined efforts of passionate women and men; a family that linked its destiny to the company’s of now 4 generations.

The Paraboot Michael Shoe is one of the original and revered shoes ever created by Paraboot – the moc toe shoe style became highly popular during the 1980’s among the ‘Bon Chic, Bon Genre’ movement and was also commonly seen in 1930’s French thrillers. The Michael was always intended to be a daily working shoe for the “everyman” with the goal of creating a fine tuned balance of class, durability and waterproofing with Paraboots iconic Michael Norwegian welted construction. Norwegian welted for people in the know within footwear means the sole is sewn to the uppers in a way which has many more benefits than the more common welting – Norwegian welting is more waterproof, helps control temperature inside more freely, provides a more sturdy construction and also merges more comfortably to the shape of your foot over time. Being high quality waterproof shoes means Paraboot Micheal’s have some weight to them – not in the sense of steel capped work boots but rather in the sense of quality shoes with purpose built to last. The Paraboot Micheal represents proper, sensible shoes for people who want something better than others out there.

Paraboot Micheals can be worn in many stylings with all types of pants, socks and stylings. One of the most popular styles attached to wearing the Paraboot shoe is the classic Americana and British inspired preppy heritage style, think Take Ivy, Polo Ralph Lauren, Beams Plus and Barbour. Looking closer to the home country, Paraboot and its true French heritage directly links back to the similarly smart preppy movement of ‘Bon Chic, Bon Genre’. The genre describes the aspirational lifestyle of the upper middle-class and lower upper class and translates literally to good taste (mostly in clothing and accessories) and good manners (not standing out among your peers) and grew organically from the the post-World War II good fortune in France. Another aspect of the BCBG movement was also maintaining your possessions alongside wearing them, making sure they last and not leaving the house with a mark on your shirt or your shoes fresh. The movement was even more defined when an almost competing and alternative upper lifestyle appeared around 1968: the Bobo or Bourgeois Bohème which became the “Champagne Socialist” group of France, each sticking to their clear cut lifestyle choices and style. For young people within France, more specifically Paris, these style tribes were similar to ones seen in streetwear, skate and punk movements and were at their core a way for peers to recognize each other and their interests.

The Made in France Paraboot Micheal Shoe. Online now.