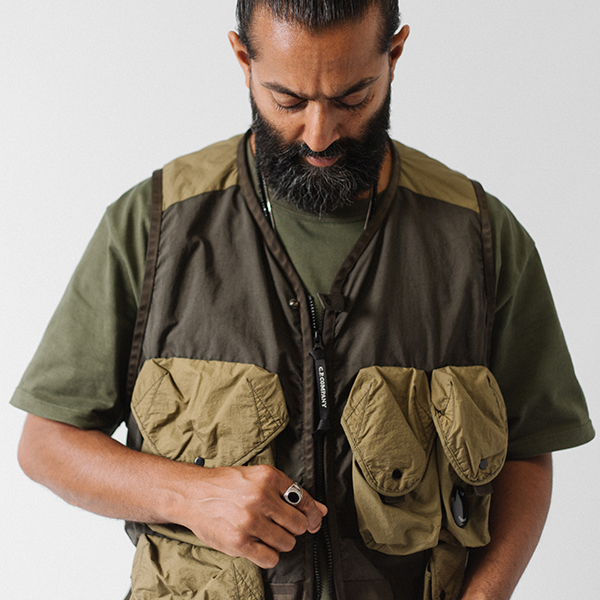 Founded in Italy in 1971 by Massimo Osti, C.P. Company was named after the Chester Perry factory where one of Massimo’s favorite comic strip characters worked at in Bristow comic series printed in daily newspapers. The forward thinking designer is now recognized as an icon in outerwear design and is also well known for starting […]

Founded in Italy in 1971 by Massimo Osti, C.P. Company was named after the Chester Perry factory where one of Massimo’s favorite comic strip characters worked at in Bristow comic series printed in daily newspapers. The forward thinking designer is now recognized as an icon in outerwear design and is also well known for starting sister label Stone Island. Massimo worked from his experience as a graphic designer and quickly created a distinctive style of communicating for his company by conducting research and design into military uniforms and work suits, C.P. became known for its functional, military-inspired outerwear and the use of innovative fabrics, dye processing techniques and shapes.

Since the early days, the brand has been solely focused on reinventing the playing field when it comes to the basic aspects of a mans wardrobe and its needs. Based on the principals of functionality and experimentation, the Italian label quickly began making a name for themselves and stood out vastly from competition when it came to innovation, construction and technical prowess decades ahead of the rest.

Massimo Osti (1944-2005) was born and raised in Bologna, Italy and has become world renowned for his influential work with C.P. Company and Stone Island. Quietly beginning his career in the fashion industry in 1968 as an advertising graphic designer, Osti quickly started beginning his own personal projects designing t-shirt graphics for the brand ‘Chomp Chomp’. Showcasing his forward thinking mindset, Osti used new techniques such as four colour process and silk-screen to create a placed-print based collection which quickly gained traction. A few years later, Osti then formed C.P. Company where his love affair with technology, design and marketing would begin.

In the early 1980s, Osti began to focus his efforts on promoting C.P. Company through new marketing techniques without allowing it to be to the detriment of his research. Otsi curated and published the C.P. Company magazine from 1985 with became an iconic showcase of the brands collections in a very direct way selling the lifestyle of the brand. Osti established the magazine with seasonal editions, producing more than 50,000 copies in English, Italian and Japanese. Each issue was globally distributed which was a bold plan at the time as newsagents at that time only sold newspapers and glossy commercial magazines. However, it was an immediate success and helped elevate the brand, Osti went on to feature iconic figures such as 3-time Formula 1 World Champion Nelson Piquet to create further mainstream interest in the brand and added prestige. Marketing material that had to be purchased, rather than being distributed freely, gave the C.P. magazine greater value and represented a departure from the norm of free catalogues within the fashion industry. C.P. Company products were featured in an unpretentious way throughout; garments were simply placed on a white background like objects of design and made the brand more down to earth for the everyday man with taste. During an interview in 1998, Osti described the C.P. Company magazine as “a gesture of trust, very well repaid, with regards to my audience’s ability to judge; the power of my strategy is the product. I am sure that the consumer recognizes signs of the technological process and formal aesthetic research behind the clothing”.

One of the most iconic and powerful products within C.P. Company’s history is the Goggle Jacket and related lens arm branding – a interest which began after Osti’s time spent researching protective hoods used in the Japanese Civil Defence, he then became determined to find a solution that would allow him to sew lenses directly into the fabric of a singular jacket hood. Following initial teething problems which were fixed after discussions with sportswear lens experts Baruffaldi, the brand released a small run of prototype jackets which featured the goggles placed onto an extended collar. Digging deeper into this type of garment, Massimo began exploring military equipment, anti-gas clothing and Swiss field jackets, using them as source material to craft one of C.P. Company’s most famous goggle jackets in 1988, the Mile Migilia. The jacket was named after the prestigious road race in which many of the drivers wore the now sought after style, the Mille Miglia featured goggles placed directly into the hood with a lens wrist viewer to the sleeve which allowed the racer to view his watch through the jacket adding further functionality to this iconic creation.