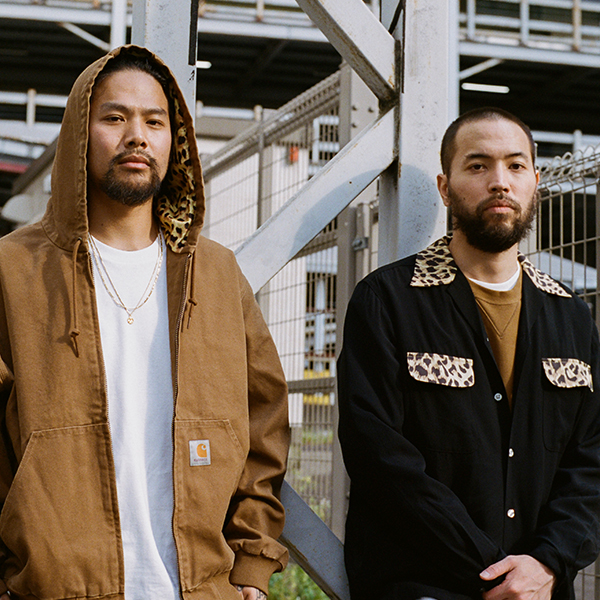 This Autumn, Tokyo based cult label WACKO MARIA has collaborated with Carhartt WIP to create an 18 piece capsule collection which focuses around iconic Carhartt WIP pieces reinterpreted by the eclectic brand.

Familiar vibrant WACKO MARIA design elements feature throughout the collection – such as leopard print and embroidered black letter motifs – giving new life to classic Carhartt WIP pieces. Leopard print leads the show throughout, and has been applied to the WACKO MARIA’s signature open collar shirt, the OG Active Jacket in two tones and two reverse iterations of the OG Detroit Jacket – featuring as both a printed outer canvas and a lining. Two colorways of WACKO MARIA’s highly wearable Skate Pant also feature having been upgraded in Carhartt WIP’s robust cotton twill. The collection is rounded off with a reworking of popular go-to Carhartt WIP pieces which include the American Script T-Shirt, Chase Crewneck and Watch Hat – all with subtle embroidered and patch co-branding.

WACKO MARIA, the energetic Japanese streetwear brand, was first launched in Tokyo in 2005 by Atsuhiko Mori. The brand started as a record store with a pop-up bar with a strong affinity for live music, collecting records and good times – the brand quickly became a cult name in Japan and within the global streetwear circle. Past collaborators have included the artist Weirdo Dave, photographer and filmmaker Larry Clark, and director Jim Jarmusch – underlining a culture- led approach that directs the brand’s aesthetic. The accompanying images for this collaboration were shot in Shibuya, Tokyo by Taro Mizutani, a regular collaborator with WACKO MARIA. We caught up with founder Atsuhiko Mori, to find out more about the collaboration and the future of WACKO MARIA.

Hi Atsuhiko, firstly congratulations on reaching the 15th anniversary of WACKO MARIA, how does that feel?

Thank you. It feels like we’ve come to a point where we’ve finally built the foundations of a clothing brand.

How have the last few months been for WACKO MARIA?

Since we weren’t able to go outside, we focused on strengthening our brand internally and started preparing for new projects.

WACKO MARIA consistently collaborates with the biggest global brands and most interesting artists, how did the project with Carhartt WIP arise?

A few years ago when I was in LA, I met Edwin Faeh’s (Carhartt WIP Founder) daughter, Vivi, at DJ Harvey’s party. Edwin also came to PARADISE TOKYO where we had the opportunity to chat. When I met him, I remember thinking “what a gentleman this man is!”

What are your earliest memories with Carhartt?

The style of 90’s rappers and the seniors around me when I was growing up wore it stylishly.

Carhartt WIP is hugely popular in Europe, what is the relationship with the brand and workwear styling in Japan?

There were a lot of people in Japan during the 90s-2000s wearing it stylishly, and I think there’s been a continuation of this since then.

What were your aims with the collaboration?

It was a good learning experience working and collaborating with globally esteemed brand like Carhartt WIP.

After a long week working, you get home, have a drink – what record are you putting on?

I listen to a wide variety of genres, but I’m currently really enjoying 60s garage.

Whats next for WACKO MARIA?

We will keep continuing to strive to do the things we genuinely enjoy.